Yesterday, Mark Zuckerberg unveiled a new Facebook layout with a lot of new features, including an ultimate timeline of sorts, including every event and post that a person has shared on Facebook.

Full disclosure: I don’t use Facebook as much as I have been. I’ve trimmed my friends list to about 375 (down from 600-ish at its peak) and I don’t post as often. I’m in a long-distance relationship (more or less), but you wouldn’t know it from my profile.

The front-page news ticker Facebook has now is a little too much information for me. I really don’t need to know that someone is listening to something or gave a thumbs-up to someone’s keg party recap. Many of the new features Zuckerberg highlighted involve automated posts, meaning that a lot of what you do will end up on your profile whether you want it to or not. Some of what you see in your own feed comes across like overkill, too.

The master timeline seems cute — imagine being able to chart your relationship, your engagement, your wedding and the birth of your first child. On the other hand, imagine scrolling back on your boyfriend or girlfriend’s timeline and seeing inevitable updates about their exes, the good and the bad.

Let’s be clear: This is first and foremost about maximizing data compilations for ads revenue. I don’t begrudge Facebook its (substantial) income, nor do I resent seeing ads on my profile (well, I might resent seeing weird dating ads). I just think that people should better educate themselves about what they’re putting out there, and Facebook might do better to make some modicum of privacy the default setting, instead of sending you on a wild goose chase for your security settings.

Of course, if you’re after absolute privacy, Facebook isn’t for you anyway. It seems though that users are putting a large amount of blind faith into the company, fawning over it and not holding it accountable for its actions. Who’s to say that the Facebook habits that feed us specific ads won’t one day give away our political philosophies? If an algorithm exists to give us dating, shopping and travel ads, it can exist for more nefarious things.

The key is for Facebook users to educate themselves and know exactly what they’re sharing and how to modify their profile security. In the end, the person responsible for keeping you safe on Facebook is you.

There’s a scene in “American Psycho” where psycho-in-question Patrick Bateman (Christian Bale) and his colleagues compare business cards. To the viewer, the cards look identical. It’s only through the group’s discussion and Bateman’s inner dialogue that we learn the differences: colors on the white spectrum, typeface, paper weight, watermark.

So … psycho … is Bateman over the perceived inferiority of his own business card that he commits murder as a direct result. (Or does he? I’ll leave the story’s numerous interpretations alone.)

How would Patrick Bateman respond to Vistaprint?

I found Vistaprint last year through 10,000 Words, one of my favorite journalism blogs. The entry suggested that journalists were moving away from identifying with an established company (say, their newspapers or stations), and further toward identifying as one-man (or -woman) operations.

Faced with no longer having a newspaper with which to identity, I’ve spent much of the last year and a half cultivating my own personal brand. I tweet all the time, I blog and I follow a variety of people and news organizations. I redesigned my CV and made sure to join emerging social networks.

And I made a business card.

While it’s been a few months since I did this, I thought now — in the midst of post-graduation job-hunting — might be a good time to describe my process.

1. I browsed Cardonizer, looking for inspiration. The examples on Cardonizer vary from the chic to the absurd, but all are eye-catching.

2. I decided what information I wanted to include. I settled on my email, phone numbers, website and Twitter handle. I also decided to list my basic job titles/attributes, from the more serious (copy editor) to the more personal (traveler).

3. I “sketched” a rough layout in InDesign. One card I’d seen had used icons, so I decided to make my own. I painstakingly drew a cursor (website icon), an envelope (email icon) and two mobile phones (phone icons), and found a black Twitter icon. I placed all of my icons in the middle of squares with rounded edges, to make them look like buttons. 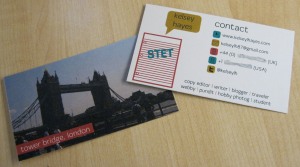 4. I selected a color palette. In addition to black for the text, I used the same cranberry-blueberry-lime combination that I’d chosen for my magazine prototype.

5. I added the text and chose a typeface. The contact information is prominently featured on the right, while my professional/personal attributes are lined up along the bottom, separated by colored vertical lines. I selected Merge for my typeface, a clean, slender sans serif that looks modern without being too cold.

6. I created my own “logo.” In my case, I drew a piece of notebook paper in one color (cranberry) and splashed a big “STET” across it in another color (blueberry). My name appears within a lime-colored dialog box, in black text.

7. Because Vistaprint lets you use both sides of the card, I selected a photo of mine for the back (Tower Bridge). I captioned the photo with a simple cranberry-colored bar, with white text.

8. I saved and exported both sides of the card and went through the motions on Vistaprint. I selected my order volume, chose a paper color and weight and cropped the graphics to fit the appropriate frame. Once I was satisfied, I ordered my cards. Voila.

The hardest part for me was settling on a design. It may be easier to use a template, but there’s something rewarding about making your own card from scratch. I know that mine’s unique, and love that it’s zippy and colorful while still being informative.

So if you’re thinking about making your own business card, knock yourself out. Chalk it up to bolstering that personal brand.

I’ve had a Facebook profile since June (or was it July?) 2005, almost six years. When I joined, it was still novel, still just for university students and still largely text-only. The Farmville scourge was a speck of cosmic dust. If I recall, it was “the Xanga replacement,” and a way to keep tabs on where people were going to school and who was dating whom.

I still use Facebook daily, but it’s become much more of a grind and more about habit than enjoyment. Like many people, I’m wary of its business practices and how it handles privacy, but I also recognize its power of sheer numbers and organizational heft.

Even now, as it’s arguably in a moral decline, Facebook is nigh unrivaled. That makes the following story so baffling.

A Search Engine Watch story earlier today described how a guy named Michael Lee Johnson took out a Facebook ad, calling for Google+ followers. Shortly thereafter, his ad account was disabled and he received a note from Facebook citing vague violations of the site’s Terms of Use policy, but with no concrete explanation.

It’s true that Facebook’s policy mentions banning or disabling competitors’ ads, and on the surface, it seems reasonable. Many news sites, for example, ban links to competing sites in their comment sections. Upon examination, though, it was truly a dumb-as-rocks decision.

1. It had the opposite effect of what was intended. If the site had left it alone, Johnson’s probably would have been just another random, slightly distracting side ad. Facebook ceded the narrative when it axed the ad. Johnson likely gained more Google+ followers through publicizing the suspension than he would have if the ad had remained up.

2. Facebook showed its cards. The company has put up a public face of indifference and wry amusement in the wake of Google+. And frankly, publicly, that was probably appropriate. Even with a boom up to about 10 million members (a rough, unofficial approximation), Google+ still only has a little more than 1 percent of Facebook’s worldwide numbers. But in banning an ad for Google+ followers (not even a Google-bought ad), Facebook looks caught in the headlights and rattled.

3. Whatever merit the “competitors’ ads” argument has, I have a hard time believing that Johnson’s ad is any more ridiculous than ads for weight-loss pills, marriage counseling, divorce lawyers and numerous others I’ve seen. The company looks downright draconian and petty. Bratty, even.

4. Fortification solves nothing. Competitors often must cross paths and even share development and ideas. Without competition, there’s no innovation, no motivation to learn and get better. Apart from being a baffling move in public relations, it’s also a blown opportunity to learn more about an emerging player.

I added Johnson on Google+ as soon as I read about his ad. And you know what?

Journalism, politics, travel, cooking, education and whatever else comes to mind.