One of the hardest things I’ve done as a copy editor is explain to non-copy editors what a stylebook is.

Last month, I was charged with updating POLITICO Pro’s rather outdated stylebook, which includes a longer general section and then smaller sections for each of its 14 verticals. It was a fun and challenging project to work for; I also view stylebook maintenance as a “rite of passage” for all career editors.

I told my parents and friends about the work project, and then set out to explain what it was I was doing. So much of it seems minute or arbitrary, and some of it is. But what matters is consistency. It doesn’t matter if we spell out the Environmental Protection Agency or not of first reference, so long as it’s the same in all of our stories. It makes for better, cleaner copy and a crisper, more consistent product.

I went through the old stylebook line by line and kept what I thought we needed and discarded anything that was outdated. I included points that I thought were important and had to come down on one side or the other for some items. It took me about two weeks of fairly consistent work, but it was finally finished.

Is it wonky? Definitely. Boring as hell to anyone who isn’t a Pro editor or producer? Probably. Is it still very important for us to produce high-quality copy? Yes.

Did I have a blast doing it? You bet.

I have, unfortunately, been delinquent at practicing my own writing while editing the writing of others. Shame on me. Right now, I’m taking a break in between holiday on-call shifts, posting news and updates about the dreaded fiscal cliff. I fluctuate between thinking that what I’m doing is important, and wanting to never, ever hear or see the phrase “fiscal cliff” again.

I will not miss 2012, or at least, I won’t yearn for it the way I still do 2011. The second half of it, at least, was exciting and interesting and challenging: moving to a new city, meeting new people and starting a job I love. But that just leads to a continuation of that in the new year.

I already have a lot planned for 2013. I’m celebrating my birthday a week late, when my best friend comes to visit and I expose her to the awesomeness that is The Passenger’s cocktail menu and Founding Farmers’ brunch. Sometime in late February, if the weather isn’t atrocious, I’m planning another long weekend in Boston. I’m playing restaurant hostess for my parents again in late March, and hoping to visit Europe again (I’m thinking Stockholm) in June. And of course I’m hoping to see how POLITICO Pro keeps on trucking and growing, and maybe try my hand at some reporting.

I feel like I’ve grown up a lot in the last few months, and I’m hoping to spend enough time in Washington to feel settled. Since I graduated high school, I’ve never stayed more than a year in the same place (although England the last time was about 14 months all told), and I’m at a point where I want to just stay still for a while.

So that’s where I am now — working and still getting the hang of a truly wonky city. Stay tuned.

Tomorrow, Oct. 6, will be my two-month anniversary at my job. It’s been very rewarding (and busy, as you can tell from my lack of updates). We’ve added three new sections: defense, financial services and tax. Every day I’m editing stories about budget issues, the health-care reform law, infrastructure, cybersecurity, oil and natural gas production, lobbying and all kinds of other topics. I’m learning a LOT.

I’m also enjoying living in D.C., venturing into new neighborhoods and trying new restaurants and meeting some new people (or rediscovering old ones).

I will not be quite as active on here as I was before I started working, but things are going well and I’m pleased so far with my new capital life.

It’s been about a week since I set up shop in D.C., and things are going great. I’m catching on at work and really enjoying my new co-workers and the work I’m doing for Pro. I’m especially excited for the legislative recess to end and for the new verticals to launch.

I have also been exploring Petworth, my residential neighborhood, and other parts of the city. In the past week alone, I’ve discovered new pubs, restaurants, shops and coffee houses. I went to a party in the Shaw neighborhood last night and met new people, and I’m making notes of fun upcoming events that I see on Twitter (such as a September ice-cream expo at Union Market in NoMa).

I really love the city so far. There’s so much going on, so many little intricacies that differentiate the neighborhoods, and so many people doing a lot of cool things. I’m following the political scene with one eye and the food scene with another. I’m excited to keep trying new things, and hope to continue making the most of my time here, both personally and professionally.

After a stressful week of packing and making furniture arrangements, I finally made it to D.C. last night. I unpacked my boxes (both arrived in good shape) and got my bedroom put together for the time being.

After crashing on the couch at my new house, I had my bed delivered and got it made with relative ease. I did a dry run to work to gauge the time and went grocery shopping. My next major investment, I decided, will be a little shopping caddy thing, like what we take to the farmers market.

I’m getting on well so far with the roommates, and getting myself familiarized with POLITICO Pro’s stylebook. Tomorrow I’m doing another run into work and meeting with some friends for dinner or coffee or something.

Work starts Monday and I’m nervous and excited. I’m glad to be back on a set routine again and working as a journalist. I’m hopeful that I’ll make more new friends and have people with whom to do things. I’m planning a weekend trip to Boston in October, and heading to Vermont in November to spend Thanksgiving with my grandparents.

My first 48 hours as a Washingtonian have been pretty good. Knock wood. 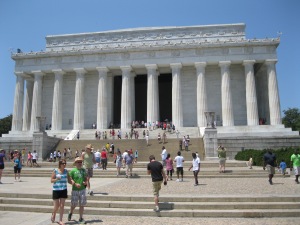 Two weeks from tomorrow, I’m moving to Washington, D.C. I signed my lease (I’ll be in the Petworth neighborhood of northwest D.C.), I’m reading POLITICO Pro’s articles and briefs as “homework” and I’m wading through my benefits paperwork.

I’m doing homework of another kind, too. Namely, the homework of getting acquainted with the city in which I’ll be living. Even though I’ve been to D.C. twice in the past month, I want to make sure I know what I’m getting into when I move. I’ve done the D.C. tourist thing, so travel guides won’t really help. For this mission, I turned to Twitter.

In the past couple of weeks, I’ve added food trucks, restaurants, clubs, media, sports teams and figures to my TweetDeck, with a column reserved just for D.C. stuff. I think it’s working well — I’m getting familiar with the lay of the land and what it offers, even though I’m not even there yet. I’m hoping that once the move is permanent, I can use what I’ve learned about the city so far to make the most of it right from the start.

I recommend this strategy to anyone moving to a new city. Find people and places that interest you, and follow them. See if Foursquare offers a city badge for your area and what venues are listed. Map everything and get a good visual understanding of your area. Download mass transit apps. Check schedules for the local sports teams. Message people already in the city and ask their advice about what’s good. In other words, be proactive. You can get into a city before you actually get into a city.

In the meantime, enjoy this photo of the Lincoln Memorial, one of my last “tourist” shots of the city.

It’s been a rough few weeks. I’ve had some personal setbacks and found out that my work permit program in the UK had been closed. But I am thrilled to announce that, as of August 6, I will be a copy editor for POLITICO Pro in Washington, D.C.

If you follow politics at all, you’re probably familiar with POLITICO. The political news site, which also produces a print edition during the week when Congress is in session, launched in early 2007 and quickly became a major media presence in the Beltway. In February 2011, POLITICO launched its Pro platform, a paid subscription service catering to policy professionals — lobbyists, congressional workers, agency officials and whatnot. What began as a three-vertical system (health care, technology and energy) branched into four (transportation launched in April) and will soon be six (defense and finance were just announced).

The “side project” has grown extremely fast and is doing very well; Pro is adding a large number of new journalists, including yours truly. It’s growing and adding staff and subscribers when many outfits are shrinking.

I’ll be joining a relatively young production staff of production editors, copy editors and Web producers. We’re encouraged to try our own side projects. Having met just about everyone in the office last week, I have to say that I am extremely excited to start work.

And of course it will be amazing to move to the capital during an election year. I know so many people there already (including a few who were kind enough to put me up and have meals with me during the interview process), and the city is just a truly awesome place to be.

I’m going back for a few days in July to find a place to live, and probably moving out for good in early August, before I start work. It seems crazy that it’s happening, but I’m glad that my patience and hard work has paid off. I’m ready to go!

Journalism, politics, travel, cooking, education and whatever else comes to mind.